David sat in his car for a while. He stared out across the street to the French Cafe where he and Mireille met for lunch the previous week. They both had been pleasantly surprised. The dining options downtown were not all that great, but the picturesque decor of the cafe had her smiling ear to ear and the service had been perfect. He smiled picturing her arrange her hair up in a ponytail because the day had been hot. He remembered watching her this morning. She slept in a little and he watched her for a few minutes. Her sleepy noises were endearing, sweet. He admired her long raven hair. It would soon be cut short, victim to the Texas heat becoming a nuisance. She didn’t like to mess with it much, a bob style would be hassle free. He smiled. He couldn’t stop smiling. The way she had turned over to hug the pillow next to her, the way she had taken a breath into it, almost as if she was doing it with him in mind. Her body and her ways, her little ways, he thought. David turned to his right looking at the passenger seat, imagining her there, her hand holding his while the other surfed for the perfect song on the radio. She likes the radio. With that, he grabbed a little black box from the glove compartment. It was too precious to leave behind. He grabbed his bag and proceeded to walk into work. He placed the little black box in his jacket pocket. He kept on smiling until his face hurt.

“Morning Rose. Yeah – have a few things I need to take care of before eight.”

“Oh. Anything I can help you with?”

“Really? Did they say why?”

“Their boss pulled the plug on the plans. Looks like they had other ideas.”

“Hmm… alright. Well, it’s their loss. Still, I might give then a call.”

He gave her a wink as he walked into his office, closing the door behind him. He looked at his accomplishments decorating the left wall. Two pictures of Mireille stood out. He smiled. He liked his office. He felt proud having made partner in the last year. He had worked hard for it. She was always supportive and encouraging, right from the start. She called herself his structural support. He laughed out loud. She was a very structured person, he was more relaxed, laissez-faire style. Balance. They balanced each other. The lovely partnership, a synchronized life, not perfect, but so in synced that it made the difficult times, easy. The rest of the morning was filled with thoughts of her. Every form signed, every person in and out of his office, she was his only thought.

“What are you doing for lunch?”

“Hadn’t thought about it. Mireille has this thing across town. I think I’ll just work through.”

“Why? You go on. I’m fine. I’m just reading some proposals for next week.”

“Are you sure? I hate to leave you in case you need anything. I was thinking of joining the girls for lunch today, though.”

“That’s what everyone keeps telling me.” He said with a smile.

David checked his phone. He knew she would be busy today, but he found it strange that she had not texted or called. He tried her cell with no success. He frowned and sat at his desk. He was missing a file. Rose’s desk. He opened the door and there she was. Beautiful raven-haired Mireille. Her deep brown eyes smiling with her mouth, full lips in crimson and a pair of sexy heels.  She was a vision.

“Mireille… what on earth? You sexy thing! A trench coat? It’s almost a hundred degrees out.”

She said walking slowly towards him. Her flirtatious smile made him gasp. He bit his lower lip and pulled her close.

“I see. Won’t you step into my office? Perhaps we can discuss the matter in a much more intimate setting.”

“I’d love to step into your office. I hear you’re the best at what you do.”

“I keep hearing that. Yes.”

His blood was taking trips all over his subway lines as he pushed her against the wall. He reached over and locked the door next to her. He leaned into her seductive smile and exploded tenderly on her lips.

“David…” She called from under his mouth.

“Mireille! You’re driving me crazy! What are you doing to me!”

“I love you.” She whispered as she began to slowly unbutton his shirt.

He kissed her passionately and anxiously. It was as if she was holding a sacred treasure in her mouth and he had to uncover it. She pushed him back gently, undoing the belt around her trench coat. His mouth opened wide as she revealed her sultry fire bare and hot. Her body was a glorious sight. He met her three years ago to the date and she still managed to hold a mystery he never wanted to solve.

“Damn! You’re so beautiful. I really like where you’re taking this meeting.”

“I really like that you are willing to negotiate this way.”

“I’m more than capable of handling the cards when a special situation presents itself.”

With that, he removed his shirt and devoured her from the neck down. She gasped and released her inhibitions. Her structure was being taken down, piece by piece. She was so glad for it. He led her to the couch unzipping, breaking out of a rigid prison, aching for her core. In one strong move he rocked into her making her gasp into his mouth. He looked at her now, her eyes closed. Feeling her heat around him made him emotional. She felt a tear on her face. Her eyes met his loving windows.

“I love you so much. You’re the best thing that has ever happened to me. You defy any sense and you make the perfect sense to me. You are the way I want to live my life. It’s you. You take me apart and piece me back together, you… “

She pulled him close and kissed him as he continued the loving rhythm until the heat settled into chaos and their breaths gave way to euphoria. He collapsed on her beautiful disaster, kissing her neck, feeling her caress on the back of his head. Minutes passed in beautiful timelessness with the two in each other’s arms. Her perpetual smile led to a giggle.

David looked up and kissed her tenderly all over her face.

“I am so glad you agree with my proposition.”

“I agree with any position you give me.”

David grinned as he reached for his jacket grabbing the small box from the pocket.

“Close your eyes because I’m about to close this deal.”

He took her left hand and slipped a beautiful diamond on her left ring finger. She took a deep breath opening her eyes to his smile.

“Marry me. Be mine forever. This is one deal I can’t live without. I’m sorry. I know it’s not romantic and I was going to take you to dinner tonight and –”

She put her finger over his lips and let out a teary eyed giggle. She caressed him. She kissed him with her smile, with her tears. She kissed him… for the rest of her life. 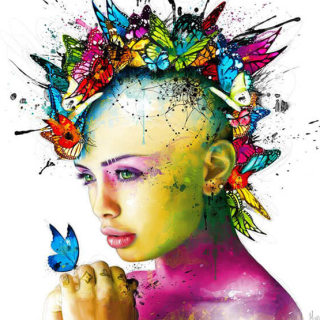